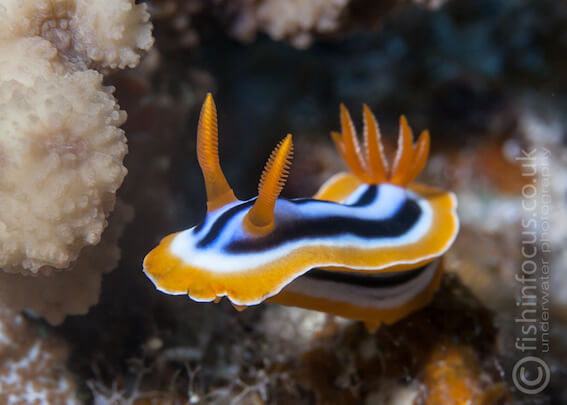 As we have spent a while looking at big stuff around the world, it’s about time we took a closer look at the reef and studied some of the tiny stuff. Often overlooked because they are a bit smaller and hidden amongst the reef, these critters are often brightly coloured and covered in cool patterns and markings.Chromodoris africana

The critter we are going to look at today is Chromodoris africana, the Four-Coloured Nudibranch but better known as the Pyjama slug in the Red Sea.  A member of the Choromodorididae family, a large nudibranch family with over 360 species, they are one of the more common species that can be found in the Red Sea. It is very easy to mistake for other species while you are diving so hopefully I can help you tell them apart!

What’s in a name?

There are a few interesting roots to the names of these nudibranchs. I like the name pyjama slug, it’s quite fun as they look like they are wearing a pair of stripey pyjamas! The scientific names however have a bit more to them. The last part africana is nice and easy, as it is found in the seas around Africa. The first part is made of two parts ‘Chromo’, coming from the Greek word ‘khroma’, refers to the bright colours often displayed by the creatures and the second part ‘doris’ is taken from Doris, a water nymph of Greek legend. Doris is often depicted holding two lit torches, similar to the two rhinophores on the head of the mollusc.

These creatures are part of the larger order called nudibranchs, a name most divers will be familiar with. The word itself is made of the Latin ‘nudus’ and the Greek ‘brankhia’ meaning naked gills. These are the large filamentous structures on the backs of the molluscs. However, not all sea slugs are nudibranchs! It can be a little confusing and will take longer than I have here, but if you have a favourite sea slug, have a read about it and find out a bit more about it.

The Chromodoris africana can be found from the Red Sea all down the east African coast and throughout the western Indian Ocean. They eat sponges and are never far from where they can be found, so their range is limited to where the sponges are found. Due to this, they tend not to be seen much deeper than 30m. A favourite of photographers, nudibranchs have some of the most beautiful patterns and colouration. The Chromodoris africana is no different! The slug has a smooth body with dark black background. The edge of the slug, called a margin, is a bright orange along with the gills and the rhinophores. The top, or notum, has two white lines that run along the length of the creature. This white then highlights the margin and more white stripes can be seen on the foot of the slug. The two stripes are important, as other species such as Chromodoris quadricolor has two light blue stripes and the Chromodoris magnifica has extra partial stripes along its back.

Extending from the head of the mollusc are two horn-like protrusions. These are called rhinophores and they are taste and smell receptors. Most sea slugs have at least two rhinophores which, while looking striking different based on species, allow the slugs to sense chemicals in the water and detect food sources and potential mates. They are not eye stalks like the ones that can be seen terrestrial slugs. Nudibranchs do have eyes, however they are very small and can only really see shadows and simple, black and white shapes. They are set into the edge of the mantle, the fleshy part around the edge of the slug.

All nudibranchs, Chromodoris africana included, are hermaphrodites, meaning they possess both male and female sexual organs. They are not able to self-fertilize so require a mate to reproduce. Two nudibranchs will meet and exchange sperm using a structure called a spermatophore so both can store the sperm and fertilize their eggs. They then lay their eggs in a tight spiral shaped structure somewhere on the reef near their favourite sponges so the young have a food source as soon as they hatch.

While not done by nudibranchs, the breeding method used by flatworms is too interesting to pass up! The animals meet up and use their two-headed stylets, the sperm transfer structure, to try and pierce the body cavity of the other to transfer sperm. The name for this behaviour? Penis fencing. Fantastic!

Life on the reef. As we mentioned earlier, Chromodoris africana is found amongst the sponges on coral reefs. It can often be seen eating sponges from the Negombata genus, a sponge that most other creatures find to be highly toxic. The nudibranch is able to store these toxins in their flesh, making them highly toxic themselves. This is one of the theories as to why they are so brightly coloured, similar to land animals being bright to warn of a bad taste or poisonous flesh. Most species of nudibranch can actually change their toxin levels or makeup by eating different sponges, making sure that they are always safe from predators. Some can even absorb nematocysts, the stinging cells used by hydroids and anemones to catch food, as their own defence systems.

To eat, the nudibranch uses a structure called a radula, similar to other mollusc species. A radula is a long, thin structure inside the mouth like a tongue which is lined with sharp teeth or hooks. The radula can then be used to scrape or carve pieces of food into the mouth. Each nudibranch has a slightly different radula and while they can only be seen under a microscope, they are beautiful and look like the heads of weird aliens! Although if any of our buddy biologists out the have any super macro lenses, see if you can get a shot of one feeding!

I love nudibranchs, opisthobranchs and all other sea slugs! Second only to sharks, I love to find nudis of all shapes, sizes and colours while I am on a dive. I have missed passing whale sharks as I’ve been so focused on taking the best photo I can of a nudibranch!

I will admit that some of the super similar looking nudibranchs do confuse me underwater, I still always smile when I see one. They are hard to find but really rather obvious to spot at the same time and they make a good look in the nooks and crannies worthwhile.

The only thing to bear in mind when photographing these nudibranchs, or any for that matter, as they are small you will need to get close to the reef. Take a minute before you approach to ensure that you will not damage the reef around them as you get in for that shot. Be aware of where your dangling bits are and make sure you are not kicking bits of the coral or smothering other things with kicked up sand.

A bright and colourful addition to any dive, make sure to bring a macro lens with you if you want to get the best shots of Chromodoris africana. They can be seen year round and the best place to see one is on the Whirlwind in the northern Red Sea. We have plenty of trips heading that way but a great one to jump on is the Winter Warmer. A photography focused trip with our in-house photo pro Mario Vitalini, there will be plenty of opportunities to get snapping these reef butterflies! Running from the 21st of January to the 28th, it’s a great wash off those Christmas and New Year cobwebs. Keep an eye out for his blog, Photo FINish, where he gives loads of really cool tips about taking the best shots for beginners and pros alike. He might even have one for nudibranchs soon so check it out!

Keep a slower pace and an eye out, these little guys are all over the place. You won’t believe the rush of happy feelings you’ll get once you start to spot them. Go out and hunt for them, you won’t be disappointed. 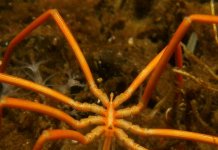 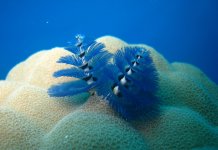 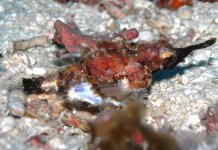 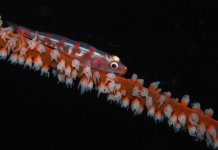 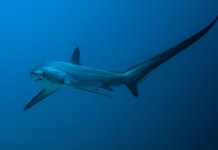