Our globetrotting director Tony Backhurst was out with the family diving one of his favourite all time locations – St Johns. No matter how many times you dive the deep south of the Red Sea, the diving always thrills. As Tony says…

“The last day of the trip comes round all too quickly. But what a great trip it was! St Johns is one of my favourite itineraries, and this trip had certainly been outstanding. The whole family looks forward to what has become our annual pilgrimage to the Red Sea and Grand Sea Serpent really does feel like a home away from home for us all.

The couple of days we spent down in St Johns reminded me of the early nineties when we first dived in St Johns – this year we were the only boat in the area again and I had the same feeling of being in a totally remote, far away world. Only at sunset could you see the mountains of the mainland, and at sunrise you could just make out Zabargad. The rest of the day all you could see was calm blue sea. We clocked up sightings at a rapid rate. Being buzzed by Bottle Nose Dolphins in 40 meters was a first for me, and nice to see that the Spinner Dolphins at Dolphin House are still at home. There were sharks, a good number of turtles and everywhere you looked those beautiful corals that are so characteristic of St Johns.

On the boat that week was my son Rowan, a newly qualified PADI instructor, and he got down to the business of teaching his first Red Sea courses. Polly and Ollie had become PADI advanced divers. Most importantly, the whole group, both new divers and old hands, were all just great, easy going, nice people. You couldn’t wish for a better bunch of dive companions. Then there was the photo shoot out between Mike Pitts and Tony Baskeyfield. (I kept my modest efforts to myself and downloaded my shots whilst the others were night diving.) There was certainly plenty of subject matter, from the beautiful ” Habilies” in St Johns with it’s abundant soft corals, to the towering hard coral canyons and charming mini wrecks in Fury Shoal. Mike and Tony had shot some of the best stills I have seen. (I still had a lot to learn).

Tony kept us all entertained in between dives by constantly dismantling and re-assembling his re-breather which despite his best efforts still kept flashing red like a NYPD patrol car both above and below the water! Good old open circuit I say!

On board was fellow tekkie Gabby, the dive guide. Gabby and Maria have to be way up there when it comes to top dive guides! “Hello my name is Gabriel” never failed to raise a laugh at every briefing, but their knowledge of everything from the meaning of the Arabic dive site names to an in depth understanding of the marine life was really enlightening.

And of course, let’s not forget the interlude of filming the mermaid which kept all of the crew very amused (or bemused!) and the Wasta Cave Pixie in St Johns Caves.

So all to soon it was the last day. Sometimes the last day can be a bit of an anticlimax. Early morning briefing at Elphinstone (Gabby of course knew it was named after an early surveyor) and things didn’t look so great. Several other boats and the wind had picked up. Then Gabby said the plan had changed and we were diving the South Plateau? So I had the wrong lens and it wasn’t looking good. How wrong can you be! As soon as we dropped in and descended onto the plateau we could see the distinctive silhouettes of Longimanus above us. In fact some of the group didn’t even bother to descend but stayed up round the boat. After a quick sortie round the plateau we joined them for a “shark fest.” There were some seven Oceanics weaving in and out of the divers, getting up close and personal. The cameras were clicking away and everybody got some great shots, a fantastic experience. We had a few new divers and I wondered where they would go from here? Everything would seem an anticlimax after this!

Second dive we opted for the North Plateau in search of Hammerheads. I wasn’t really expecting too much but you have to try. After a bumpy RIB ride we dropped in and pedalled out on past the 40 meter plateau following Maria out above the end of the 50 meter “finger” beyond. Still nothing, and then we hit the thermocline and I knew it was game on. Sure enough, first a large grey reef shark and then a huge shoal of Barracuda. And then over the plateau came a large hammerhead, among much whooping, pointing and and fists on foreheads. I managed to get a shot that was evidence if nothing else and then back to the main reef and a long, long swim back to the South plateau. Not too sure why we did this as we definitely agreed that we wouldn’t before the dive but hey ho! When we eventually arrived back under the boat the shark action was still unfolding big time, so more camera work (still on the wrong lens) until we reluctantly had to get back onboard.

What a great finale to one of the best ever trips! And the Red Sea was still as beautiful and as special as always!”

Fancy a warm winter getaway with lots of diving? 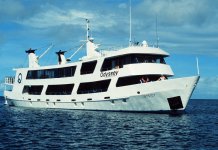