Egypt:  Mistral might not have won liveaboard of the year, losing out to her sister ship Whirlwind, but the crew and guides are working hard on making sure the guests still enjoy exceptional sightings… and last week surpassed all expectations.  The dolphin frenzy continued apace with sightings at both Abu Nuhas and Jackson.  Turtles were also out in Tiran and there was an apparent shark sighting too at Jackson.  Over in Ras Mohammed, it was Shark and Yolanda that delighted with barracuda and a napoleon sighting.

Maldives:  Orion has been at the heart of the big fish sightings so far in 2012 and last week they had quite a sharky week.  12 hamerheads were seen at Thaa but Huvadhoo is the place to be at the moment with grey reef sharks, a turtle, 2 leopard sharks and 2 sail fish (what an unusual sighting to go in your log book!).

Philippines:  Divers visiting Calanggaman with the wonderful Exotic resort in Malapasqua are already starting to see the newly introduced marine park have a positive effect on the marine life.  Fish numbers seem to be up with loads of action on the reef.  All positive signs for the future. 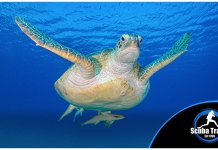 Fancy a warm winter getaway with lots of diving?